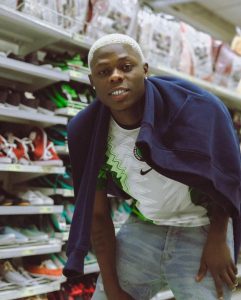 We would be seeing Mohbad’s biography, date of birth, age, early life, family, parents, siblings, girlfriend, education, songs, albums, net worth, social media handles and everything else you’d love to know about him.

Ilerioluwa Oladimeji, professionally known as Mohbad is a Nigerian music star, who is a singer, songwriter, rapper, entertainer, stage performer and a recording artist.

He was born 8th of June 1996 in Lagos State Nigeria. Mohbad was born to Nigerian parents in Lagos, much is not known about his family.
Not much information is known about his educational background, but from his interviews we think he passed through the basic primary and secondary school education.
He grew up in Lagos State and his environment played a major role in his music pattern.

Not much is known about Mohbad, but an online source described him as a very calm person.

In the music industry, Mohbad, is really one of the best rappers to look out for.
He came out a few years ago, probably when Zlatan and Chinko Ekun came out and he’s really doing very well.

Mohbad had been releasing freestyles on Instagram, Facebook and Twitter, but his rise to stardom began after he did a freestyle for Kizz Daniel’s ‘Fvck You’.

After a while, the news broke out that he was going to be become a part of the Marlian Music Imprint soon. He was signed alongside Zinoleesky, Fabian and Cblack.

The Marlian president signed him and some other Yoruba singers like Zinoleesky, Fabian and Cblack.

He brought the four artists on stage during the 2019 Marlians Fest, which was held at Eko Hotels & Suites, Lagos on 31st December.

Mohbad has a number of songs to his credit including:

Base On Believe (BOB)

Not much is known about Mohbad, but an online source described him as a very calm person.
We estimate he might be worth around $25,000.

His Instagram handle will show you some photos where he was chilling in Dubai or other expensive holiday locations. Maintaining these lifestyles cost millions, though they might as well be sponsored by his record label.

You can connect with Mohbad on: