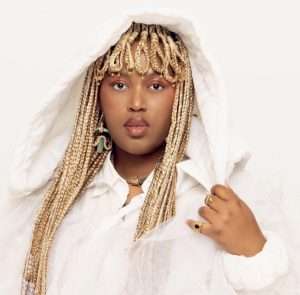 Asanda Lusaseni Mvana, also known as Msaki, was born in East London, Eastern Cape in 1988. She grew up in a family of music.

Also, her father was a DJ and grandmother a music composer. Growing up, Msaki got involved in musical activities.

Msaki was a member of alternative rock band while attending college. She attended Nelson Mandela University  but later dropped out within a year.

Later, she enrolled in Rhode University where she also obtained Master of Fine Art degree.

2012, Msaki attended music school in North Carolina in the USA.

The singer started a professional career in music in 2008 at the age of 20. She was also a member of a rock band while attending college.

However, in 2013, she established her own record label One Shushu Day Artistry and release her debut Extended Play Nal’ithemba.

Later, she release her single “Imfama Ziyabona” in 2016 which debuts on Metro FM Charts for 19 consecutive weeks.

In June 2017, her debut album Zaneliza: How The Water Moves co-produced by Nduduzo Makhathini. The album got nominated for Best Adult Contemporary Album at the 23rd ceremony of South Africa Music Award.

Following the success of her debut album, Msaki collaborated with South African DJ Prince Kaybee on a song titled “Fetch Your Life”,  released on February 8, 2019.

Her single “Pearls To Swine” featuring TRESOR and Kid X was released on February 2019. Later, it  bagged nomination for Best Produced video.

In January 2022, Msaki collaborated on a song “Own The Future” with Goodluck, Shekhinah, and YoungstaCPT.

Her double single of “Fetch Your Life II” and “Mntakababa” featuring Kabza De Small and Focalistic. 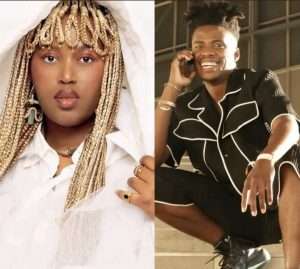 Singer Msaki and  Smash Afrika we’re accused of having an affair after picture if the lovers kissing was found by Kefiloe, the wife of Smash Afrika.

The affair led to several backlash from fans on Twitter as many were shocked that Msaki was a lesbian. Also, Smash Afrika confessed to cheating on his wife with Msaki after he was confronted.

“He told her, unlike her, Msaki makes him happy and gives him peace.” Smash’s wife Kefiloe reveals.