Tunde Onakoya, the founder of Chess in Slum Initiative, is currently trending on Twitter after the American media personality Paris Hilton applauded him for his humanitarian service to the Nigerian community.

Tunde has been making headlines recently due to his humanitarian impact in several slums in Lagos, through his Chess in Slum Initiative. A few months back one of his proteges, Ferdinand Maumo, a 10-year-old born in Makoko with cerebral palsy, a speech impediment, and could hardly speak English won a chess champion in one of the slums in Lagos State.

This not only caught the attention of the masses but also that of the Governor of Lagos State, Babajide Sanwo-Olu who invited Fedinard for a game and gifted a sum of 1 million Naira for his welfare.

Not long after, Tunde organized another tournament for unprivileged children living under the bridge in Oshodi, Fawaz Adeoye, an 18-year-old bus conductor won the tournament, which put in him the spotlight to receive a donation of more than 2 million Naira.

Prior to these recent victories, Tunde Onakoya was notorious for picking children in the street and improving their welfare and providing for their basic needs.

Tunde Onakoya is a Nigerian chess master, coach and founder of Chess in Slums Africa. He has organized a number of interventions for children across slums in Lagos including Majidun, Makoko and recently, Oshodi.

Tunde Onakoya was born on the 6th of October 1994 in Isale Odo a slum community in Ikorodu. His father was a Bus Driver and his mother a Petty trader.

Due to the family’s poor financial status and the deteriorating status of the father’s Job, Tunde couldn’t go to secondary school. He had to sacrifice for his younger brother as his parents couldn’t afford both school fees at the same time.

Being away from school due to financial constraints, he regularly visited a barbershop in his vicinity to play the PS1 game console, which was where he learnt about the Chess game. Tunde noted that he saw the way the chess pieces were carved and he instantly loved it.

He then urged the barber to teach him how to play but was ignored. Eventually, Tunde learnt how to play and the rules of the game by watching the barber and his friends while they played.

Things got better for him after his mother offered to work for an expensive school in exchange for her son’s education, his mother worked there for six years and resigned on the day he wrote his final exams.

It was at this school, he perfected his chess skills due to the school’s active chess club and won his first chess trophy where he came third in the tournament organized by the school. After the chess tournament, he began to play chess and was representing the school in external tournaments. He travelled for competitions and competed with other prestigious schools including King’s College on Lagos Island.

After completing his secondary education, he furthered his education at the Yaba College of Technology, where he joined the college chess team and represented the school at the Nigerian Polytechnic games association tournament and they won all the gold medals, he was also a double gold medalist and went on to win the gold medal at RCCG chess championship.

The notable “Chess Hero” is in a relationship with @almaasinobi. Who recently took out time to appreciate and reconfirm her love for Tunde on her twitter handle. Emphatically stating “forever is where it begins”. 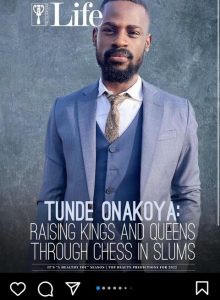 Tunde has brought hope to a lot of children brought up in this slum, and this humanitarian act has not gone unnoticed.

The “Chess Hero” can be connected with via his Social Media handles.
Instagram: @chessinslumsafrica and twitter @Tunde_OD