Rishi Sunak Biography – Rishi Sunak is a British politician who has served as  Prime Minister of the United Kingdom and Leader of the Conservative Party.

Born to parents of Punjabi Hindu descent in the town of Southampton, Sunak’s father, Yashvir Sunak, is of Indian and Kenyan descent. 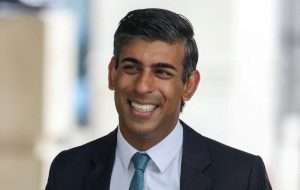 Sunak was born on 12 May 1980 in Southampton, United Kingdom, to Yashvir and Usha Sunak, African-Born Hindu parents of Indian Punjabi origin.

He is the eldest of three siblings. His brother Sanjay is a psychologist while his sister Raakhi (Williams) works in New York as chief of strategy and planning at the United Nations global fund for education in emergencies.

As a young boy, Sunak attended Stroud School, a preparatory school in Romsey. He also attended Winchester College, a boys’ where he was made the Head Boy.

During his time at university, he studied Philosophy, Politics and Economics (PPE) at Lincoln College, Oxford where he later graduated in 2001.

Later in 2006, he got an MBA from Stanford University. Sunak always had passion for politics which led to his choice of study in college.

UK Prime Minister Rishi father Yashvir Sunak, was born and raised in the Colony and Protectorate of Kenya which is the present day Kenya.

Yashvir is a general practitioner in the National Health Service (NHS). While Rishi’s mother Usha Sunak was born in Tanzania.

She is currently the director and pharmacist at the Sunak Pharmacy in Southampton and has a degree from Aston University.

Both is paternal and maternal grandfathers, were born in Punjab provinces of then British India, and migrated from East Africa to the UK with their families in the 1960s.

His paternal grandfather, Ramdas Sunak, was from Gujranwala (present-day Pakistan). He moved to Nairobi, Kenya in 1935 to work as a clerk.  Later, he was joined by his wife Suhag Rani Sunak from Delhi in 1937.

Also, his maternal grandfather, Raghubir Sain Berry, worked in Tanganyika (Tanzania) as a tax official. Later, he got married to Tanganyika-born Sraksha, with whom he had three children.

In 1966, the family moved to the UK where Raghubir joined the Inland Revenue and as a collector, was appointed a Member of the Order of the British Empire (MBE).

During his time at university, Rishi Sunak undertook an internship at Conservative Campaign Headquarters.

However, his political career kicked of as a member of the parliament after he was selected as the Conservative candidate for Richmond (Yorks) in October 2014, defeating Wendy Motion.

During the 2015–2017 parliament he was a member of the Environment, Food and Rural Affairs Select Committee.

In October 2022, Sunak was appointed Prime Minister of UK, after Liz Truss resigned from office. He is the first British-Asian Prime Minister and the youngest since modern history. 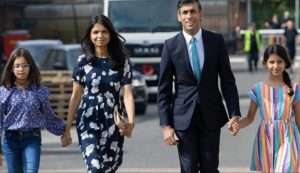 Sunak is married to Arshata Murthy, daughter of Indian billionaire N.R Narayan’s Murthy, the founder of the technology company Infosys.

Murthy and Sunak met while studying at Stanford University. The couple married in 2009 and have two daughters.

According to The Sunday Times Rich List 2022 Sunak and Murty the 222nd wealthiest people in the UK, with an estimated combined wealth of £730 million, making Sunak the “first frontline politician to join the rich list”.