Voting in BBNaija TV show season 7 is done and the vote Results as while as the percentages of the housemates are here!

The new results and polls of housemates who are strong and those who are weak, have been revealed.

Who has the highest voting in BBNaija Season 7 Here is the vote results for week 8 in the Big Brother Naija season 7. The voting result gives a insight at the housemate topping the chart for the week.

It also, shows housemates who are strong contender and who has the highest vote in the BBNaija  season 7 show. 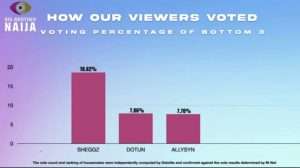 Likely Housemate to be Evicted in Week 9

Results from online polls and social media, shows that housemates likely to be evicted from the this week.

Housemates up for possibly eviction in Week 9 and might leave the show are;, Groovy, Sheggz, Hermes, Adekunle.

However, housemates like Bella and Bryann are sure to get saved by fans as they have more supporters than their other colleagues they were nominated with.

Nevertheless, there is speculation that only three out of the 6 nominated housemates will be safe which means that one housemates from the 4 weaker housemates might be safe.

The Results and vote percentage of viewers favorite housemates up for final eviction of week of the show is release Sunday.

So you can watch to see the Vote results of week 9 on the Sunday live eviction show on Sunday 25 September.

Also, you can continue to visit  on our website for more update on the vote results this week.