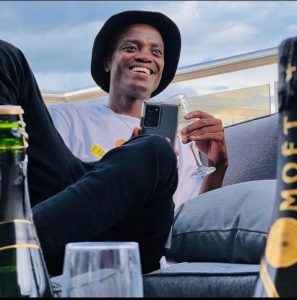 Khutso Steven Kgatla popularly called King Monada (born 25 November 1992)  is a Limpopo-born South African singer, producer, and songwriter.
In this post, we take a look at King Monada Biography, career, songs, and many more things you should know about him.

He was born in Mokgolobotho village near Bolobedu in Limpopo.
King Monada’s mother is Thandi Matlala and his father is Elvis Kgatla. He passed away after a long illness. King Monada has elder siblings who are Michael Kgatla and Lucky Kgatla.

He attended the Sebone Primary School and Magoza High School.

The singer dropped out in Grade 8 to pursue music.

He was born on the 25th of November 1992 in Mokgolobotho village near Bolobedu in Limpopo, South Africa. He is 30 years old.

The Malwedhe hitmaker is married to Lerato Ramawela and in another relationship with fiance Cynthia Ntebatse Lion. He is a proud father of two, Temoso who is 8, and a baby boy named Junior.

He has an estimated net worth of $500,000 to $2 million which he has earned from being a musician.

The star’s FAME number of awards include Best Sepedi Artist, Best Dance Artist, and Entertainer of the year.
He also won the Best Male Artist at the Limpopo Music Awards (Limo), while his hit song Malwedhe won Song of the Year.

In 2018, he bagged three awards at the Limpopo Music Awards. Monada walked away with awards for –  Best Khelobedu single, Song of the year, and Best duo/Group collaboration.

King Monada is a South African singer from Limpopo. His music has put South Africa on the map and it gets played in all parts of the world.

Monada is known as the king of Bolobedu music. He started doing music in 2005, as a dancer. His first single was Dolly My Love which he recorded in 2010.

King Monada owns his music label – King Monada music. He is an independent artist and says he hopes his label will produce some of the best artists from Limpopo.